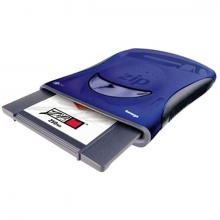 Back before USB sticks were a thing, in the mid to late 90’s there were Zip drives by now defunct company iOmega. The drives held at the time a huge amount of data compared to the alternative 1.44MB floppy disks. Disks for the iOmega Zip drives were 100MB , 250MB then 750MB some of the last drives.  There were 650 and 700MB CDR drives but for the purpose of this discussion I will leave them out as they were CD-RW Drives and CDR was what actually killed zip drives.

During the mid-nineties when it came to backing up information, there was a few ways of going about it, span the data over several floppy disks that were very unreliable but cheap, use a tape drive that used cheap tapes but an expensive drive. Or use a Zip drive, that was reasonably priced, and had disks hat were reasonably priced too. 100MB in the 90’s was a huge amount of data, but what if you want to access this data on a modern computer or laptop today?

Surprisingly the USB versions of the drives are still working on pretty much all versions of Windows, using legacy device drivers that are built into Windows. Older operating systems do require drivers but there are freely able to download from here: iomega drivers.

Older IDE and SCSI drives may be much harder to get setup without an older PC, so finding a USB drive at a place like goodwill for a few dollars might be a quicker solution.

Importantly once you have access to your backups stored on the Zip drives is to move them to a modern storage device like and external hard disk or a USB drive in case the disk do become inoperable in the future.

The Zip system was based loosely on Iomega's earlier Bernoulli Box system; in both systems, a set of read/write heads mounted on a linear actuator flies over a rapidly spinning floppy disk mounted in a sturdy cartridge. The Zip disk used smaller media (about the size of a 3.5" floppy, rather than the compact disc-sized Bernoulli media), and a simplified drive design that reduced its cost. This gave a drive that held much more than a regular floppy, with data transfer rates and seek times (about 1 megabyte/second and 28 milliseconds on average) that (while not directly competitive with hard drives) were much quicker than a standard floppy drive.

The Zip system was introduced with a capacity of 100 megabytes, and quickly became a success as people used them to hold large files (especially bitmaps) that regular floppy disks would not be able to handle. As time went on, Iomega eventually bumped the format to 250 and 750 megabyte capacities, while improving the data transfer rate and seek times.

The Zip's popularity started to fade around 2000. By this time, several people had reliability problems with their Zip drives (especially the Click of death), and the relatively high cost per megabyte of the proprietary cartridges was becoming unattractive, compared to the falling costs of CD-R technology.